Tattooing professionally for 12 yrs. Been drawing and practicing in different mediums for as long as I can remember. Later the arts turned into the focus academically where I majored in fine art throughout community college and onto The Art Institute of Chicago where I attended for a year before going broke. The tattooing career started with a 3yr. apprenticeship from Spider Tattooz where I was taught every aspect in tattooing from A-Z by Spider and Darrell Bashor. It was here that I started again from scratch unlearning everything I assumed I knew from needle making and machine building/repair to constructing and successful design that would later become a well executed tattoo. Spider relocated Spider Tattooz to Sycamore, IL and Meridian Line Tattoo was created in its place. I stayed tattooing at Meridian Line for a number of years until flying solo and opening Burning Sparrow Tattoo. I am forever grateful to Spider and Darrell for all the knowledge. The apprenticeship I was given is a rarity these days. I was given a three year apprenticeship where I had to learn how to speak to customers before they even began to teach me how to lay down clean lettering which was just as important as a portrait. I've been eating and sleeping tattooing for 12 years now. It's what I was taught and its what I put into practice to this day. 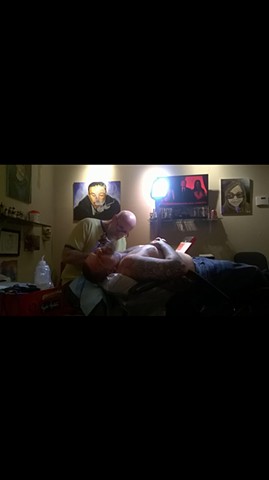